“I believe an animator’s job is to make a character’s movement beautiful.”

“I believe an animator’s job is to make a character’s movement beautiful.”

Mike Taylor is a successful freelance character animator. He worked part time as a 3D Generalist for a number of years before embarking on his animation career at the tender age of 40 years young. He’s never looked back, and never had so much fun. “My focus is character animation, anything with a character in it, no matter how crazy. I love to animate.” If you equate Florida with retiring on a beach, you might want to think again and check out the DAVE School classes. “It’s better than sitting in a cubical!”

During his six years at Turbine, Taylor has done character animation on The Lord of the Rings Online, Dungeons & Dragons Online and Infinite Crisis. “I’ve worked on several museum interactives, in particular for Monticello, the Ben Franklin Museum and the Toy Hall of Fame in Rochester, NY where I’ve done everything from 3D characters to these crazy looking 2D cutout characters, which were lots of fun. I’ve worked on quite a few commercials, including a half dozen Cheetos spots with Chester Cheetah.” One of Taylor’s current clients is Healthimation where he’s been having a blast defining a character for their health care weight management app. 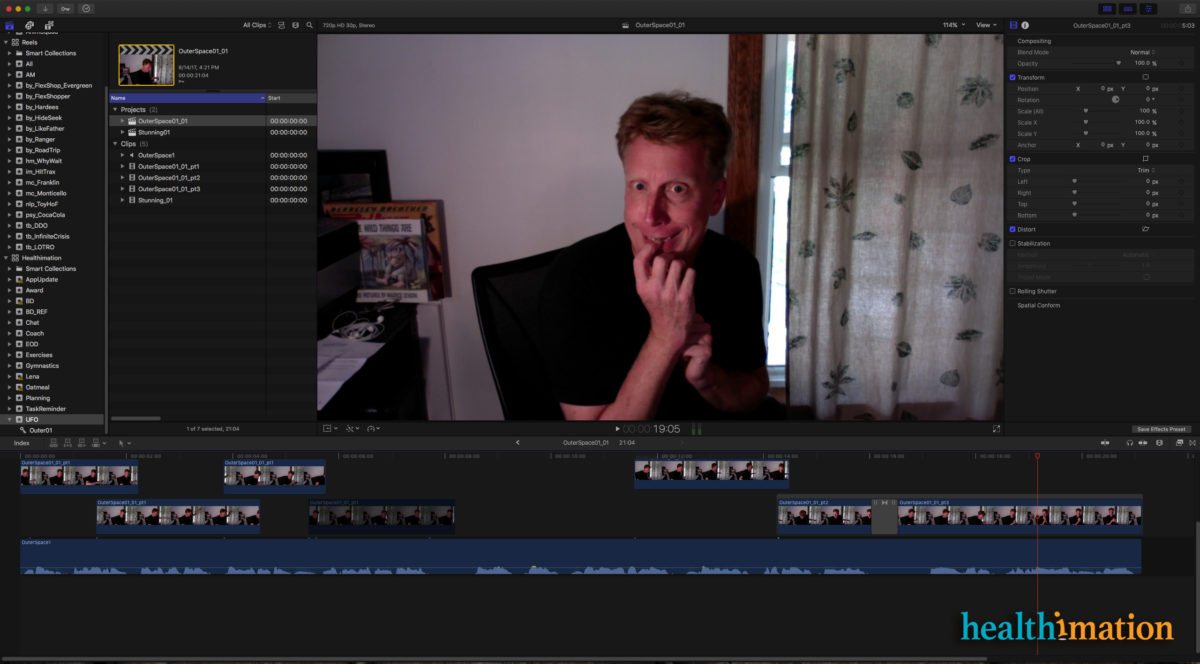 Cutting together the best bits of reference material to use for blocking.

Taylor begins by simply thinking the details through, considering details like dialogue and related acting, actions, body mechanics and which movements would enhance the shot.

His next step is reference. Taylor will film himself acting out the scene, or locate specific references on YouTube. “I have a ton of videos of just myself looking like a fool, acting this stuff out.” His goal is to find interesting poses, gestures, and an overall sense of timing.

Next, using Final Cut, Taylor cuts together just what he needs for that single shot. “At the very least, I’ll get up and act out specific moves, or act things out in a mirror to get a better idea of the mechanics involved.” 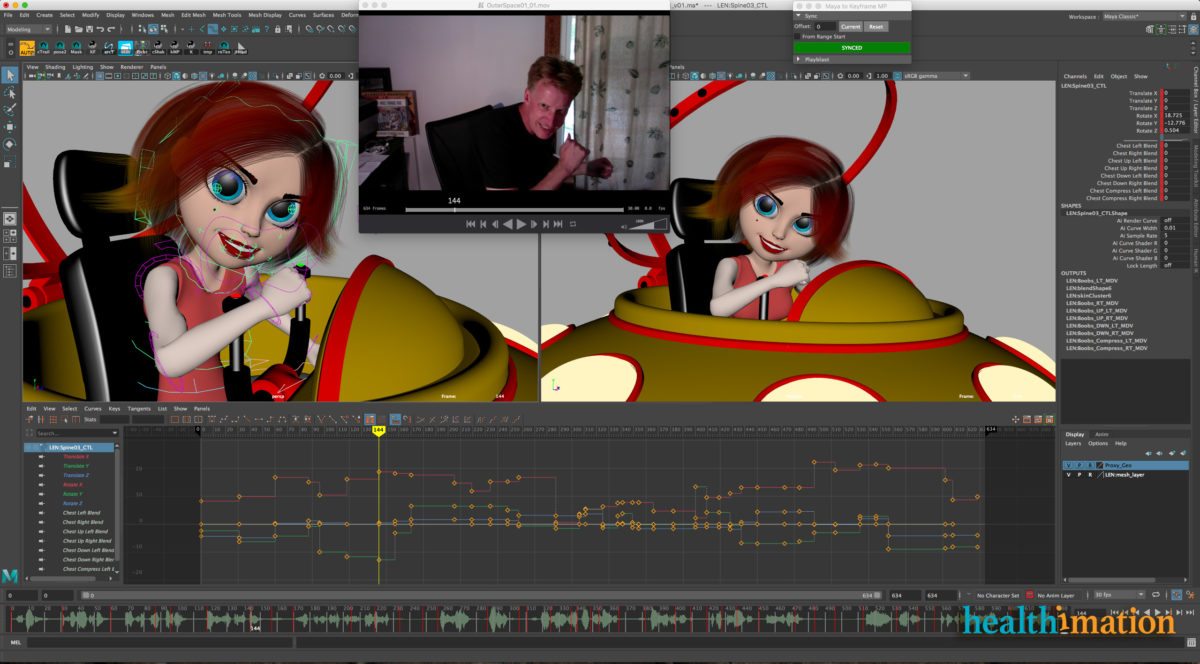 Using the reference in Maya to drive initial blocking. 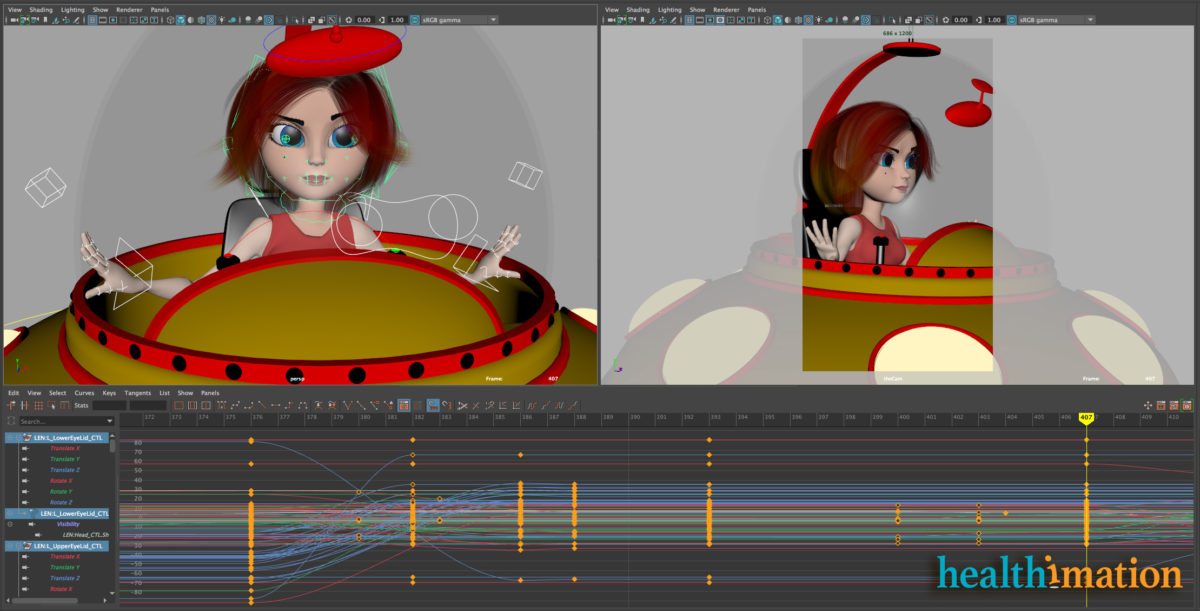 Working out the timing of transitions in the Graph Editor.

To find the good extreme poses, Taylor poses out that same video sequence in Maya. “I use the Zurbrigg Keyframe MP movie player that sits on top of Maya and syncs with the Maya timeline, so as I scrub the Maya timeline, the video reference also plays through. I set keys on every controller on the character at these extreme poses, even if it’s a minor adjustment because that helps when I re-time the shot or add moving holds. I’ll set keys, again on every controller, anywhere there’s a smaller gesture I want to happen or an anticipatory or transitional pose I want to make sure I hit. Instead of step, I almost always use straight to splines. Next, I’ll copy a pose to, say 3-6 frames before the next pose.” This allows Taylor to set the rough timing of the character animation transitions. To avoid the floatiness that working in splines introduces Taylor will grab a pose a couple of frames before a key pose and set that a few frames before the next pose. “That sets the foundation of my moving holds.” 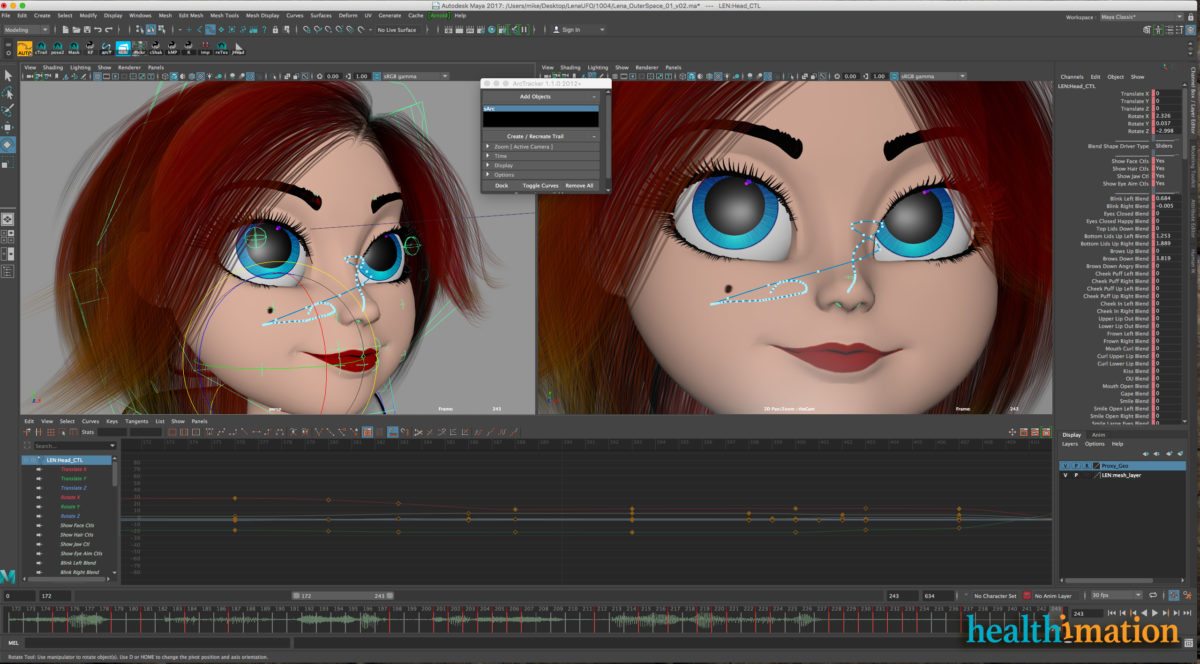 Tracking the path of the nose can help clean up the movement of the head to the hips.

Using the dope sheet editor, Taylor will tweak the extreme poses to refine and exaggerate the timing and improve the overall texture, making quick movements faster and long pauses longer. “Then I’ll start adding inbetweens so the movements flow together nicely.” He tracks arcs “which I think is a super-important” using ArcTracker. “Arcs are one of the 12 Principles of Animation. Just about every movement a living organism makes is in an arc, whether it’s the path of a hand waving, or hips going up and down during a run. I believe an animator’s job is to make a character’s movement beautiful, and arcs are a key ingredient.”

The next step is adding polish to the character animation, tackling a second or two at a time, starting with the hips and feet. The goal is to make the hips move believably, make them look like they are driving the character’s actions in concert with the character’s thought process. He adds the impression of weight and tweaks the feet animation.

Next is the head and torso, and offsetting the animation. “Either the hips are driving the motion — in which case the body moves slightly later and then the hips — or vice versa. A thought moves the head first, then the body, then the hips” creating a wave of natural motion through the character.

A LOT of detail work happens here, but watch the character!

Next he tweaks the arms and fingers that he posed during blocking. He adds hand and finger movement while at rest, and additional head movement to accentuate the dialog (or inner dialog) to give more life to the character. “At this stage, it’s about cleaning that movement up, offsetting animation down the limb, and tracking arcs.” This includes facial animation, and introducing lip sync and to add any detail animation to give the character more life and more of a thought process. “I pay special attention to eye blinks. That’s when the character starts to feel alive.”

“I always think of a phrase I heard years ago when working on a shot  ‘falling down the stairs and landing on your feet’.  Most shots feel that way, like I’ve completely lost control of it, or it just looks like madness on the screen, even though in my head it makes sense. Then in the end, it usually all works out.”

Located on the backlot of Universal Studios Florida® in Orlando, The DAVE School has an 18,000 square foot facility that includes learning and interactive labs, a dedicated Virtual and Real-Time production stage, a Vicon motion capture system, 3D printing and VR/AR labs and secure student access 7 days a week.

The DAVE School is an academic unit of NUC University (NUC), which is accredited by the Middle States Commission on Higher Education, 3624 Market Street, Philadelphia, PA 19104. (267-284-5000) www.msche.org. NUC’s NUC University – IBC Technical Division (NU-IBC), Florida Technical College (FTC), and The Digital Animation & Visual Effects School (The DAVE School) are included in this accreditation. The MSCHE is an institutional accrediting agency recognized by the U.S. Secretary of Education and the Council for Higher Education Accreditation (CHEA).